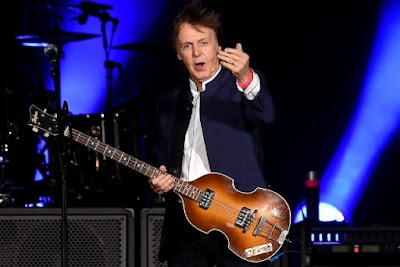 It all went down in the corner of a hotel bar somewhere in Seattle where McCartney was waxing lyrical about how he belted someone. As the veteran bass player demonstrated his left jab, he inadvertently caught the local rocker in the face.

“He hit me. He didn't quite pull back the punch you see,” recounts Vedder in an interview aired on SiriusXM’s Beatles Channel. “As I was listening I was thinking, Paul McCartney just hit me in the face and it hurt. I think I remember tasting a bit of blood, he got me right on the side...and he apologized quickly so it wouldn't get in the way of the story.”

Make no mistake, Vedder is proud of taking a shot to the mouth from a Beatle, describing the incident as “a fascinating story, a great time in my life actually” to be thumped by the living legend. “And I remember it hurt for a few days and I remember when it went away when the pain subsided and the swelling went down, I kinda missed it.”

It’s not the only hit McCartney has landed of late. The Beatles’ 50 anniversary edition of Sgt Pepper's Lonely Hearts Club Band recently returned to No. 1 in the U.K.
at July 10, 2017