Common's "Letter To The Free" Wins an Emmy! 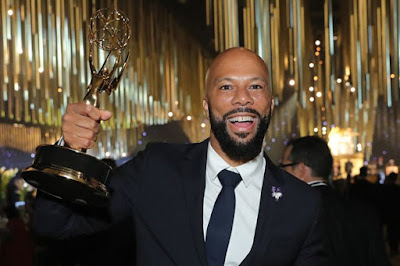 The Chicago MC’s song “Letter To The Free,” a collaboration with Bilal featuring production by Karriem Riggins and Robert Glasper, won the award for Outstanding Original Music and Lyrics thanks to its use in Ava DuVernay’s Netflix documentary 13th.

The win for “Letter To The Free,” which also appeared on Common’s 2016 album Black America Again, was one of four victories for DuVernay’s film. 13th took home the awards for Outstanding Documentary or Nonfiction Special, Outstanding Writing for Nonfiction Programming and Outstanding Motion Design as well.

Common was clearly excited about his triumph at the Emmys, as seen by his flurry of posts on Instagram. Still, he made sure to recognize the plight that inspired the track’s creation.

“Although I’m honored and excited beyond belief for this award, my motivation for doing this song was from the heart like it always is,” Common wrote. “This award is for all the incarcerated people in the prison system and for justice. In the words of the late great Phife, ‘I’ll never let a statue tell me how nice I am…’. We have more work to do and this is only the beginning. So please don’t think for 1 second that my passion for justice stops here. Thank You @televisionacad @netflix @ava @karriemriggins1 @robertglasper @bilalmusic #Elena #Roy #Vernis and everyone involved with this project. #ImagineJustice.”
at September 12, 2017