Marvel's Black Panther Will Be Unlike Any Other Superhero Movie 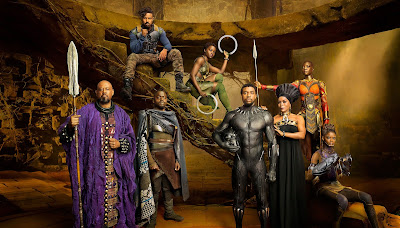 Is it any wonder the Black Panther cast reacted with pure, infectious joy upon seeing the first footage at SDCC 2017?

Ryan Coogler’s spinoff continues to be one of the most exciting and fresh films on Marvel’s calling card. Largely situated in Wakanda, a beautiful utopia teeming with Vibranium and wonderfully eccentric costumes, this looks to be among the studio’s most self-contained efforts to date, which is no mean feat given it’s arriving just before the super-sized Avengers: Infinity War.

Much of that comes down to Coogler’s direction, as he’ll reteam with Fruitvale Station  cinematographer Rachel Morrison – not to mention Michael B. Jordan as the villainous Killmonger – to bring Wakanda to life. But there’s something else to be excited about, too, and that’s the cultural aspect of Black Panther. Which, according to star Chadwick Boseman, makes it very unique indeed.

"“I will say that Black Panther was unlike any other movie – Marvel movie, superhero movie – that’s ever been done, just because of the cultural aspect,” says the actor. “At some point, it rivaled the culture of Get On Up because of the African influence and music and dance. It was quite a ritual experience, and a rites of passage for a lot of people."

Given what we’ve seen of the pic from the trailers released thus far, what Boseman says here makes sense and while stating that it’s “unlike any superhero movie” that’s ever been done may be a bit of a bold claim, we’ve no reason to doubt him. Anticipation is sky high for the flick and at the moment, all signs point to Ryan Coogler and his team delivering in spades come next year.

“I have seen gods fly. I’ve seen men build weapons that I couldn’t even imagine. I’ve seen aliens drop from the sky…but I have never seen anything like this.” Following its UK launch on February 9th, Marvel’s Black Panther spinoff will scurry over to North America in time for February 16th. It’s one of three major tentpoles poised to enter the MCU in 2018, with the other two being Avengers: Infinity War and Peyton Reed’s miniature sequel, Ant-Man and the Wasp.
at November 08, 2017