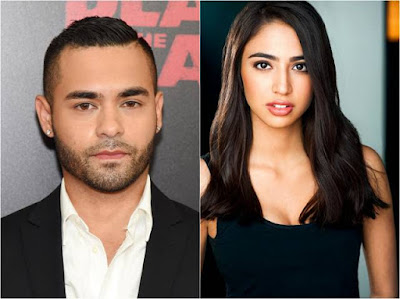 Former East Los High star Gabriel Chavarria has been tapped as the lead and Jessica Garza (Six) has been cast as the female lead in the upcoming The Purge series for USA Network and Syfy.

The franchise, about one day each year when murder and mayhem is legalized, hatched its highest grossing effort so far with the most recent The Purge: Election Year in 2016. DeMonaco oversees the series which will be an entirely new chapter in the 12 hrs of annual lawlessness & is slated to launch in concjunction with the next installiment in the movie franchise, The First Purge.

Chavarria will play Miguel, a US Marine with a hard edge and a noble mission. After receiving a cryptic letter from his little sister, Penelope (Garzia), he returns to town on Purge Night – prepared to face the senseless violence in the streets alone in order to protect what he loves most – his family.

Garzia’s Penelope belongs to a Purge-worshipping cult. Having pledged herself to be sacrificed at the behest of their charismatic leader, Penelope’s faith is tested when she is exposed to the ghastly realities of the Purge.