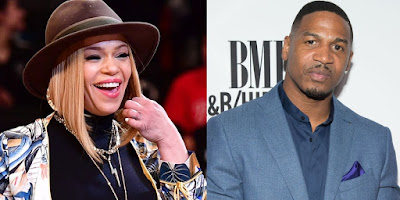 Legal documents reportedly show Evans and the No Way Out producer filed for a marriage license in Clark County earlier that day.

The pair broke up last year but evidently mended their relationship. The two flaunted their love for one another on Twitter on their wedding day.

“I love you Faith Renee Jordan,” Stevie tweeted. “I love you back Steven Aaron Jordan.”

This marks the third marriage for Evans, who was previously married to The Notorious B.I.G. and record executive Todd Russaw. She & Russaw divorced in 2011.

On the music front, Evans released her duet album with the late Biggie, The King & I, last May. Most recently, Evans and her new reality TV star husband released a clip for her upcoming video, “A Minute.”
at July 19, 2018