Ozzy Osbourne and Sir Elton John Have Collaborated on a Song 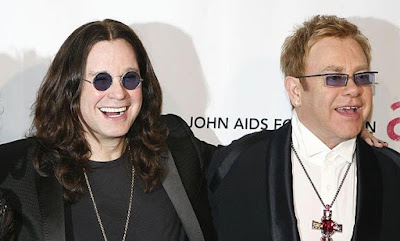 The former Black Sabbath frontman's wife Sharon Osbourne has spilled that their 'I'm Still Standing' hitmaker friend is featured on an upcoming track with her husband, though she didn't say whether the tune is featured on Ozzy's upcoming solo LP 'Ordinary Man'.

Asked what the 'Crazy Train' hitmaker - who has been recovering after he was forced to postpone his 'No More Tours 2' shows, after being hospitalised with pneumonia and then suffering a fall in January - has coming up in 2020, Sharon told her co-host Carrie Ann Inaba on US chat show 'The Talk': "A lot of good things. Wellness.

"And to get back with his fans, to get doing what he loves, which is touring and being out there with his fans.

"And yes, there's new music, and it's great.

"He's got all his friends playing on it.

"He's doing a song with Elton. There's so much good stuff. Good things."

Ozzy, 71, recently revealed Elton, 72, has been a great support to him as he gets himself back on the mend.

He said: "Elton is a sweetheart. He has phoned me throughout all this. He was at the house the other day with his two boys. They are great kids. They are such a good family. You would be surprised, when you are feeling miserable you find out who is a friend and who doesn't give a s**t."

The unlikely collaboration comes after Ozzy teamed up with Post Malone on 'Take What You Want' on the rapper's 2019 LP 'Hollywood's Bleeding', which he credits with inspiring him to record his first studio album since 2010's 'Scream'.
at January 09, 2020