The "Gilmore Girls" Revival Was the Fastest Watched Netflix Series Globally, Which Could Mean More's to Come 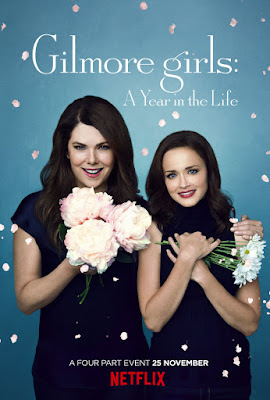 Smash hit Netflix shows like House of Cards and 13 Reasons Why may be the streaming service's bread and butter, but nearly a year after its release, Gilmore Girls: A Year in the Life has emerged as the most "binge-raced" Netflix show globally. In other words, more subscribers finished the revival in under 24 hours internationally than any other show the service has produced. Maybe Gilmore Girls fans really do take coffee in an IV.

The record has major implications for the revival, which was evidently very popular. Shows that are consumed with this much voracity not only indicate interest, but are exactly the type of production that will keep bringing in subscribers.

Given this level of success, Netflix will surely be hounding GG creator Amy Sherman-Palladino as well as stars Lauren Graham and Alexis Bledel for a second season. It may be a hard sell, however, as Sherman-Palladino has repeatedly confirmed she never imagined anything past the four episodes she wrote.

"We really had a very specific journey in our minds and we fulfilled the journey," she told The Hollywood Reporter after the revival released. "So to us, this is the piece that we wanted to do. And the whole thought about, 'Is there more, is there more, is there more?' — this has to go out into the universe now. We've got to put this to bed, and then whatever happens, happens."

The only GG family member who's given us any hope so far is Graham, who uttered one very brief yet suggestive sentence during an appearance on the Today show: